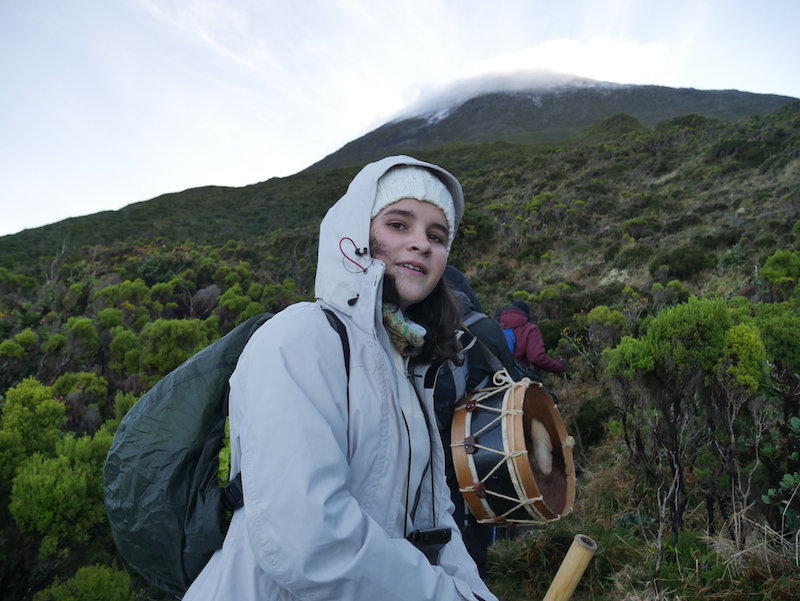 We were invited by Terry Costa and MiratecArts to once again collaborate on a cultural event on Pico Island. This time it was the awesome Montanha Pico Festival.

Montanha is an off-season opportunity to enjoy the highest Portuguese point – Mount Pico, 2351m – alongside the culture of the island. It is not an event aimed at mass tourism, or it would be organized in August of course. It’s an eco-festival that focuses on using artistic intervention to bring awareness to sustainability and ecology. It is therefore no surprise that such an important event was accepted as a member of the United Nations “Mountain Partnership”.

When I was last in Pico, for Azores Fringe 2017, Terry and I were wondering how to create a piping event that could promote internationally both the musical instrument and the island. The opportunity to kick-start our project came with another awesome initiative – Ross OC Jennings and his “The First Piper” campaign. In short, Ross is pursuing his goal of being the first person to play bagpipes in every country of the world. Check out his project – he is a great guy to be around with a positive message: www.TheFirstPiper.com

Mountains have always been linked with bagpipes, so why not celebrate both? So the date was set for the first piper’s meet in Pico. The idea was to offer a small pipe recital at the beautiful Whalers Museum Auditorium, and climb Pico with our bagpipes the next day. Also, over the days, we would get a chance to enjoy the island, meet other pipers, discuss ideas and network.

As usual, for a better schedule and inexpensive plane fares, we had to do a bit of island hopping. We had a connecting flight on Terceira Island, only 45 minutes away from Pico Island.

All in all, we were going to arrive one day before the event to get settled. However, the Azores islands have a life and will of their own. On the plane, the captain’s voice came on the speaker to let us know that “an attempt” at landing would be made in a few minutes in Terceira. Hmm…attempt?

On account of strong winds, the plain wiggled like a fighter jet and approached the runway flying completely sideways. The captain however provided one of the smoothest landings I have ever experienced in my life. Rumour has it that only real pros fly to the islands, and this experience totally proved it for me.

Once we were safely inside the airport, the ground crew seemed to be in on a cosmic joke that only islanders fully understand. The airport was swiftly closed because of the wind and rain, and we had a bus waiting to take us to a gorgeous hotel on the other side of the island, courtesy of SATA Airlines. We enjoyed the hotel, the indoor swimming pool, and even went for a walk to the historical city of Angra do Heroísmo. We got soaking wet for foolishly walking under heavy rain, but were amazed at how warm it felt. The island was a lovely steady 17ºC and strangely enough, for the life of me, it didn’t feel as humid as Porto (our hometown in continental Portugal).

We dried our clothes in the hotel room, as ingeniously as we could, and went to bed.

For breakfast we had lovely sunshine and crazy double rainbows. They were so frequent on the islands that I could not believe it. After enjoying the sunny view on the bus on our way to the airport, we were received by a short ice blizzard the precise moment we were collecting our bags and entering the airport. Soaked…again…then five minutes later…sunshine.

We were received on Pico island as usual by Terry, and also Emanuel (a MiratecArts collaborator). The real surprise was having Ross playing the Great Highland bagpipes – in the terminal no less.

From that point on we were into the finely-oiled, precision machine that is MiratecArts. We were engaged by everyone to play music, discuss subjects, visit places and have nice meals, with a lively flexibility that islanders must have on account of the constantly changing weather.

Eric Sauda, a percussionist from France, and Urro das Marés, a piping group from São Miguel Island, had their flight delayed and arrived just as the recital curtain was opening. And guess what? SATA Airlines managed to lose their pipes. No problem! I normally carry a few extra gaitas, and we were able to muster some percussion.

They reacted swiftly and professionally, immediately entering the stage. The crowd loved them. Not bad for Azorean pipers, hey?!

Maria, Gustavo, Miguel and Eric played a few tunes with me from Portugal and Galicia, and I had a chance to present the production prototype of Gaita Caminno, a brand new and innovative product, supported by our partners “J. Pinto Leitão Woodtech”, to be launched very soon.

After the event I was approached by Azoreans that wanted to learn the gaita, and particularly make it their own tradition; the Gaita Caminno provided that. I was honoured with their reception to our new instrument.

The reason for unveiling the Gaita Caminno in the Azores was actually to test the product in real world hiking conditions. The test and adventure was planned for the next day – climbing to the top of Pico, all the way up to 2.351 m (7.711 ft) above sea level. Actually, Pico is a volcano that reaches 6.098 m (about 20.000 feet) above the sea bed, making it the highest underwater mountain in the world.

However, there was snow and ice at the top, so the climb was rescheduled for Sunday. On Saturday we chilled, made some music and got to know each other. To be on an island, with such wonderful people, with warm musicians, great food and wine is an inexpensive privilege that most people should experience at least once. The weather was comfortable, and quite unique for winter in Europe. You could hardly believe that there was ice up on top of the mountain, but from afar, the snow was clearly visible.

Ross Jennings, fully committed to getting to the very top, left the following day at 5am with an experienced guide and a professional photographer. People don’t call him The First Piper for nothing! That was way too early for most of us pipers though, and most sane people – if I may say so – but at 7am everyone was shuttling to the Casa da Montanha, the reception cabin for all mountaineers.

Because the mountain is an ecological heaven, only one trail is open. Everyone must start there, check in, get a GPS tracker, and fully understand that Pico does not fool around. In fact we were only allowed to climb because we were being escorted by three guides. Weather conditions were sketchy. There was a tension in the air that rattled most of us.

Everyone was extremely well equipped – a constant reminder not to fool around. The wind was blowing and a mix of thin rain and mist weighed heavily upon us. However, the loudness of the pipers, the laughing, the cheerful voices, gave us courage.

We were off! First goal – to reach the “furna” cave shelter. Several minor eruptions had left large openings on the ground that now work as natural shelters, and in our case, nifty natural theatres.

We were inside the clouds now, and despite the grey weather and the slippery ground, everyone made it for the pipe concert at the “furna”. It was something out of a Marcel Duchamp painting – fluorescent mountaineers’ clothing, thick mist, a cavern, and bagpipes. What a concert.

I put my tiny Gaita Caminno in my backpack, and came out of the shelter to even more wind and mist. Some people headed down after the concert, but around 42 people, including children, gathered around, keen to head to the top for more music.

More than I care to admit, heading down to the comfort of the cabin at this point was looking pretty damn perfect. Cookies and Azorean tea were waiting for us. The wind was blowing faster and faster, and we could not see past a few dozen meters. Further and further disappearing into the mist were the crazy São Miguel pipers carrying drums, for goodness sake…

Little by little, at a slow but steady pace, the guides Monica, Nuno and Claudia from www.Epico.pt  led us up the mountain. The clouds started to clear, and gorgeous sunshine filled the scenery.

What a view. It was our first stop. The mist, rain and beginner’s fright were immediately forgotten. It was a blast to be up there. Everyone was smiling and snapping photos. We sat down on a rock, ate a candy bar, and enjoyed it for a while.

Although the climb was increasingly demanding, it felt like we had passed the discomfort zone. We felt like we could go all day long, so much so that when we reached the 1500m point and the guides announced that “we were done for the day” and that was as far as they were comfortable taking our group, people asked for more.

The guides were accommodating, since the party had been impeccable climbers up to that point. We only stopped when we reached the snow, all the way up at 1860m. It was a nice clearing, and the view was gorgeous.

I kept looking up in search of a glimpse of Ross coming down, or the sound of his pipes…

The snow was melting fast, and some of us were disappointed not to continue, but we were burning daylight, and engaged in snow fights, photos and lots of piping. In fact I could not stop my old tutor habits, and even gave a free piping lesson to the guides. 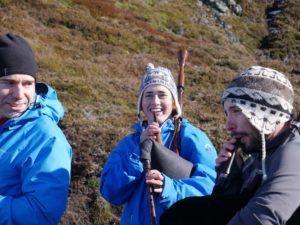 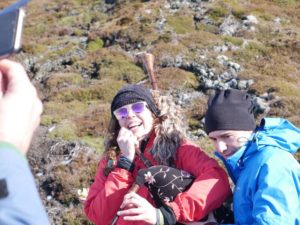 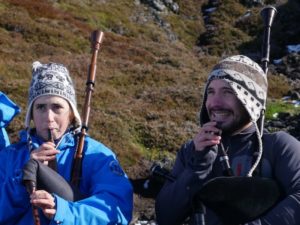 Right there I made the guides make a promise: next year they would take us all the way to the top, and I would make sure that by then, they would also be pipers! The challenge was accepted – I have several witnesses.

It was time to head back.

Going down was a completely different mountain. I could not recognize any of the features of the path I had just took going up. After a while one starts to get overly used to the inclination, and it’s only when you slip or jump that you feel the entire weight on your legs. Do not underestimate the mountain.

I have to recognize I haven’t done any mountaineering for a few…decades…and Pico took a toll on what is probably an old injury on my knees. The descent was painful and slow, and only the warm-hearted professionalism of the guides, with their incentive and advice, made me walk – sometimes on all fours – all the way down to the Casa da Montanha.

Crazy Ross Jennings arrived some 30 minutes later. He went all the way to the top. It felt like victory all around.

It was time for cookies, Azorean-grown tea from Europe’s only tea plantation (Gorreana), laughter, and more piping…

I could tell you the rest…like the nighttime swim in the ocean, lit only by cell phones…but you really had to be there to understand.

That’s why GaitaMaker and MiratecArts have invited you all next year for more! 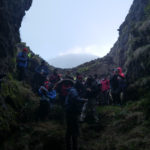 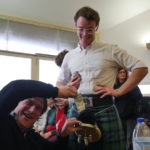 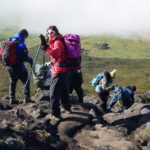 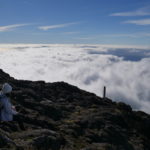 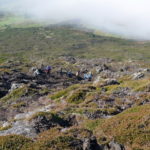 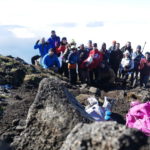 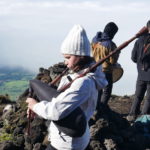 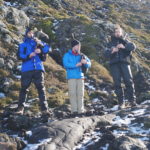 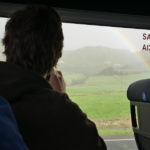 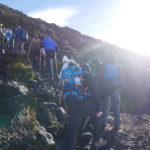 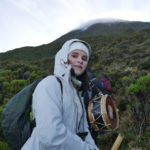 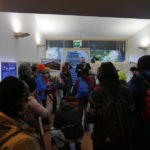 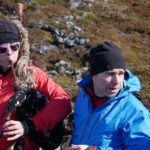 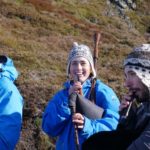 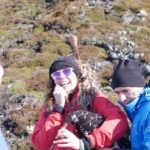 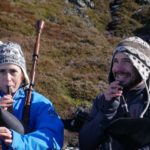 Gonçalo Cruz  is a Researcher, Musician, Educator & Maker of Bagpipes & Woodwinds.  He holds a Masters in Architecture, and is currently a Doctoral candidate at the Sibelius Academy - “Forgotten Bagpipes - The redesign of the Säkkipilli in Finland”. His research interests are in the disciplines of Music, Ethnomusicology, Organology, as well as Art & Design, History & Archeology, with a special interest in the subjects of Instrument building, Tuning and Temperament.  As an artist, Gonçalo has been working as a music composer and guest musician on live and recorded performances, and is keen in developing the concept of “Music as Design”  .